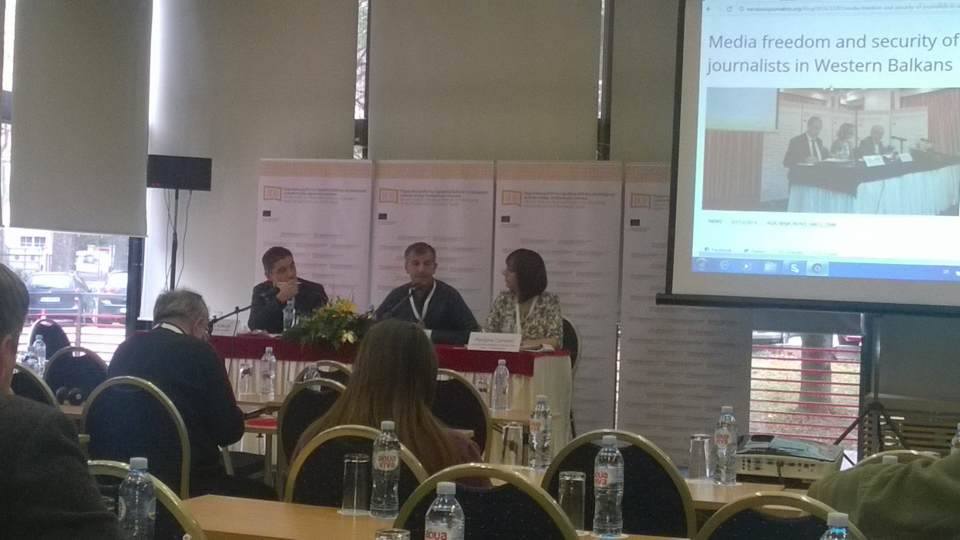 The Conference was organized by Independent Association of Serbian Journalists as the part of the project Regional Platform for Advocating Media Freedom and Security of Journalists – network of journalist organizations and unions in Western Balkan countries. Results of regional research about media freedom and journalist security, led by Snežana Trpevska, Ph. D. from Institute for Communication studies in Skopje, Macedonia, were presented at the Conference. The research comprised 5 countries in the region: Bosnia and Herzegovina, Kosovo, Montenegro, Macedonia and Serbia and involved 3 topics: (A) legal framework and its enforcement, (B) financial and working situation of journalists and (C) security of journalists.

Regarding law the research shows that legislation is within standards, but law enforcement is rather clumsy. In no country Internet is not subjected to specific regulations and there were some cases of attempted censorship. Regulatory bodies and public services in all countries are considered as highly politicized and very similar opinion is shared about state advertising, especially at local levels.

Defamation is decriminalized in all researched countries, but legislation keeps fines very high and that influences self-censorship. In Bosnia and Herzegovina, for example, 80% of journalists said they were afraid of being taken to court under defamation charges.

Research shows a general trend of critical journalisms „fleeing“ to online area. It has already become the zone of free journalism, but on the other hand zone of attacks. Non-profit media journalists point out that they are very often targeted by centers of power and part of colleagues who try to discredit them as profiteers and foreign „mercenaries“.

Regarding protection of sources it is evident that in all countries journalists have been under pressure to disclose their sources without court orders. As far as access to information goes, administration is silent in all countries or they stall big time. Journalists in each country consider Parliaments to be the most open state institution while Governments and political parties to be the most closed.

Insecurity: Fear for financial and physical security is rising

Research chapter dealing with working and financial situation of journalists shows that their economic and social position has deteriorated during past few years.

In some countries journalists’ salaries are below average, they often work overtime and have no long lasting (permanent) contracts. That is the reason they are exposed to constant fear of being fired. In all researched countries there is one more problem – due to lack of internal acts that should protect newsroom independency regarding owners and journalists regarding editors there is very strong influence of management.

It should be noted that this research is the first one to gather statistics about attacks against journalists in the region. Data show that number of physical attacks in all researched countries have increased in last few years. Nearly all cases of journalist murders are still not solved and perpetrators yet not found.

Online platform safejournalists.net that for the first time gathers statistics about attacks against journalists from the region has been presented at the Congress. Platform facilitates reporting attacks or violation of journalist rights as well as searching data bases about those cases in six regional centers (Sarajevo, Zagreb, Priština, Skopje, Podgorica, Beograd).

Online platform is part of System of early warning and prevention of attacks against journalists that is under developing by Regional Platform for Advocating Media Freedom and Security of Journalists – network of journalist organizations and unions in Western Balkans, established in January 2016.