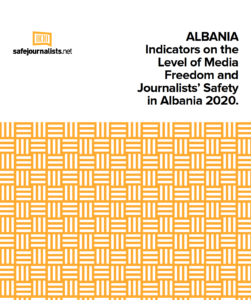 In Albania, and contrary to international best practices, defamation is a criminal contravention. 20 lawsuits against journalists, mainly for defamation, are recorded in 2020. In several cases the independence of journalists’ work in Albania has been threatened, through increased number of lawsuits against them, particularly investigative journalists. The Albanian Alliance for Ethical Media established self-regulation mechanisms in 2020. Generally, the freedom of journalists’ work and association are guaranteed. Limited transparency, whether intentional or ex officio, of state institutions also hinders the work of journalists.

In terms of economic position of journalists, major challenges persisted in 2020, particularly regarding the employment, working conditions, safety, and professional development. Editorial independence is affected by the interrelations among the media, politics, and businesses. Self-censorship is still present. Working conditions of women journalists are in most cases more challenging than men, particularly in term of salaries, intimidation, leading positions in the newsroom, and harassment. Journalists working for online media portals and local media outside of Tirana face more challenges than their counterparts in mainstream media in Tirana. Field journalists report that they feel unprotected from physical threats. Investigative journalists report fearing judicial lawsuits coming from parties affected by their work. Young journalists face additional challenges including lack of solidarity by their experienced peers.

Read the full report in English

Read the full report in Albanian