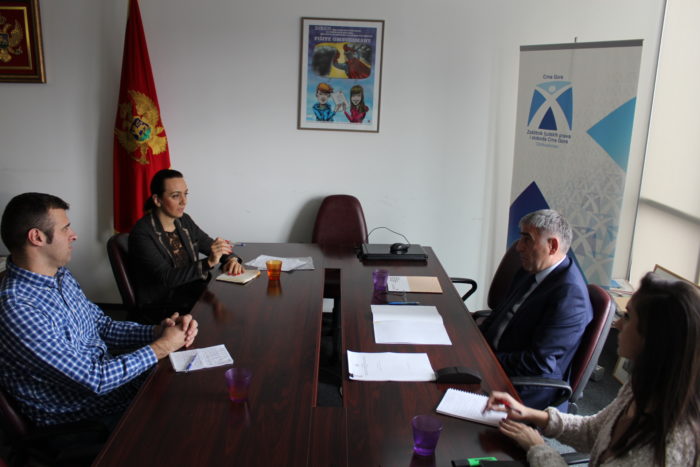 Podgorica, 14.12.2017 – The Protector of Human Rights and Freedoms of Montenegro, Šućko Baković, met with Marijana Camović and Radomir Kračković, the President and the Vice-President of the Trade Union of Media of Montenegro (SMCG). During the meeting media setting and challenges journalists face with while preforming their duties have been discussed.

At the meeting data and main conclusions from SMCG report “Indicators on the level of media freedom and journalists’ safety”, which the Protector uses as one of the sources for gathering information for its annual report related to media area, were discussed.

SMCG representatives presented the work and plans of the organization and discussed possibilities for joint future activities were discussed. In this regard, SMCG initiative related to the amendments to the Law on Electronic Media and the Law on Media aimed at achieving greater financial sustainability of local media as well as journalistic autonomy and independence, was pointed out.

The Protector said that he would support thus directed legal changes, pointing out the need for further actions regarding strengthening of media independence and freedom in all aspects: economic, safety, etc.

“We support SMCG efforts to improve the position of journalists in Montenegro. Independence and autonomy at work, defined working-legal status and satisfactory financial conditions should be unquestionable preconditions for journalists in order to enable them to perform their work in a committed and quality manner and maintain their integrity”, said Baković.

Camovic and Kračković specially emphasized SMCG commitment to resolving previous attacks on journalists and media assets, pointing out to the problem of expiration of statute of limitations for some cases.

They all agreed that it has been a cause for serious concern and that bad message has been sent which can encourage potential future perpetrators.

The work of the current composition of the Commission for Monitoring of the Investigation of Attacks on Journalists and Media Properties, was also discussed, as well as expectations and achievements not only of the Commission but of similar bodies as well.

It is jointly assessed that it is necessary to maintain and intensify cooperation between SMCG and the Protector, thus contributing to the improvement of human rights in the field of media.