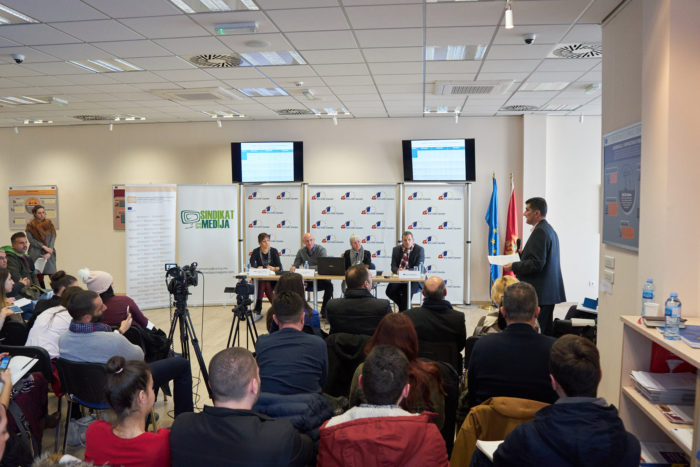 PODGORICA, 20.12.2017 – “The Law on Electronic Media should be amended and an obligation for local self-governments to determine the minimum amount of the annual budget for financing of local public emitters should be prescribed in order to finally ensure their sustainability”, was said at the presentation, which was held in Podgorica, of the legal analysis on the position of local public emitters and the rights of journalists in Montenegrin media laws.

The analysis was done by Professor Sandra Bašić Hrvatin, PhD and Goran Đurović for the needs of the Trade Union of Media of Montenegro. The reason for its creation has been the long lasting period of difficult position of employees in numerous local public emitters in Montenegro, whose salaries and wages have constantly been late. This has also been the reason which has forced employees in RTV Pljevlja to be on strike for more than a month.

Hrvatin and Đurović noted in the analysis that municipalities applied different practices regarding financing of local public emitters in the previous period and that funding was received according to the  budget size and the type of an emitter (radio or television).

“If municipality estimates that it is necessary to establish a local public emitter, then it is necessary to secure its funding but in a way that would ensure the highest level of its independence. Only secured and pre-determined minimum funds for the achievement of a public emitter’s mission would ensure high level of its independence and respect of professional standards. Thus, the security and unimpeded action of a local public emitter will increase and will not depend on the assessment and needs of political parties in power in some municipality “states the analysis.

Representatives of local public emitters pointed to the problems they face with in their work, especially when it comes to Pljevlja and Rožaje, which have a very bad relations with the local self-government. Director of RTV Pljevlja Dejan Miličić said that they had no idea how to pay late salaries to employees.

Representative of the EU Delegation to Montenegro Patrick Schmelzer said that the media are important because they concern the negotiation chapters 23 and 10. He also said that it is question how far we can go with regulating any area, as well as that when it comes to the behavior of individuals in Councils of local public emitters, it cannot be regulated with the laws.

“I don’t want to spread skepticism, but I’m afraid that in many countries in the region, we will face with a serious situation when it comes to the independence of journalism as a whole,” said Schmelzer.

SMCG President Marijana Camović said that in that organization they believe that during last year’s amendments to the Law on Electronic Media an oversight was made regarding the financing of local public emitters and that journalists should be provided with autonomy in the editorials.

Hrvatin and Đurović also recommended amendments to the Law in the part related to election of local public emitters’ council members. According to the existing model, council members are mainly nominated by the state or local public enterprises and public institutions, so it is not possible to talk about the independence of editorial policy. Therefore, it is necessary to prescribe in the Law on Electronic Media for members of the councils to be nominated exclusively by civil society organizations. Such a model of election is applied for Public Service RTCG Council and good practice from the national level should be transferred to the local – with a proposal that in the local public emitters’ councils it would be desirable to have one member of the representative trade union.

The analysis also entails proposals for amendments to the Media Law in order to provide mechanisms for protecting journalists and editors from the influence of media owners. There are no such regulations in Montenegro, and in combination with journalists’ unenviable financial position, low wages and limited career opportunities, journalists and editors often comply with the influence of the ownership structure on the editing of media content.

Thus, amendments were proposed according to which journalists would have the right to reject certain editor’s orders if they would violate the regulations, professional rules or Ethical Code.

Also, the media text or contribution to which meaning has been changed during the editorial process, should not be published under the name of a journalist-author, without his/her consent. In addition, in the case of a lawsuit against a journalist for articles, contributions, photographs or caricatures, his/her employer would be obliged to hire a legal representative at his/her own expense, as well as to compensate costs in case of a loss of a lawsuit.

The analysis was done within the project “Regional platform for advocating media freedom and journalists safety in the Western Balkans” funded by the European Union. All explanations provided during the presentation will be included in the analysis.