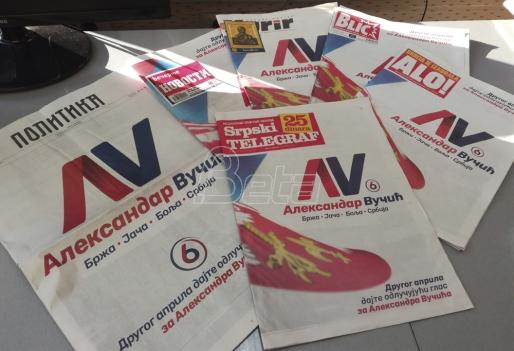 BELGRADE, 25.04.2017. – A few days before the 2 April 2017 Serbian presidential elections, a picture was posted on Twitter that caused an unexpected storm.

The picture, taken three days before the vote, which was widely expected to be won by the current prime minister Aleksandar Vucic, showed a copy of each daily newspaper from that day laid out on a table. Yet every paper looked the same. Each was wrapped in a blue, red and white election campaign poster of Vucic’s Serbian Progressive Party (SNS).

“It was a shock,” said Slavica Lekic, the newly appointed president of the Independent Journalist Association of Serbia (NUNS), from his office in Belgrade. “With this, Aleksandar Vucic clearly demonstrated that he can control over everything in this country.”

The mass advertising on the front page of the nation’s newspapers was for many a step too far; proof of how powerful Vucic and his party had become, and of the financial control they exert over Serbia’s media. Vucic won the election by a landslide, but the picture’s effect lingered. It was an important reason why, on the day after Vucic’ huge victory, tens of thousands of young Serbs took to the streets across the country to protest.

The protesters, at first mainly students, organised themselves on social media using the hashtag #protivdiktature, which means “against dictatorship”. Thousands have been protesting on a daily basis ever since. They’re worried about the state of democracy and media freedom in the country where the president-elect is consolidating his power over all institutions, leaving little room for critical voices.

Media freedom has declined since SNS came to power in 2012, and deteriorated further after Vucic became Prime Minister in 2014, according to Reporters Without Borders.

Journalists increasingly face economic and editorial pressure as well as threats and intimidation when they are critical of the government. Independent media are often the subject of smear campaigns by pro-government media outlets and TV stations, targeting them as foreign mercenaries and enemies of the state.

Lekic points out that most of Serbia’s mainstream media, including private media, are indirectly controlled by the government. There are strong ties between the government and the business community, giving both a huge leverage over advertising budgets, he explains. “When Vucic came to power he arrested the richest businessman in Serbia, Miroslav Miskovic,” says Lekic.“That act frightened all the other businesses, which are now doing whatever they can to please him.”

Even before the vote, there were opposition complaints about the uneven nature of the media’s coverage of the campaign. According to a report by the Bureau for Social Research, who monitored the campaign, Vucic appeared on television more than all the other candidates combined, and was usually portrayed in a positive light.

“He directly controls the most popular TV station, TV Pink, and the most read newspaper, Informer,” says Lekic. “The other media are subject to self-censorship due to the pressure of advertisers connected to the government.” Lekic is convinced that Vucic’s move from prime minister to president will lead to even more difficulties for Serbia’s independent media. “This is definitely the end of freedom in journalism in Serbia,” he says.

Aside from a few online voices, the only critical newspaper is the daily Danas, which means “Today” in Serbian. The paper was founded in 1997 during the repressive regime of strongman Slobodan Milosevic but grew to become a free voice in Serbia. But today Danas is struggling to stay alive. Like many across the world, business has been tough over the past few years. But it became a lot tougher when nearly every single advertiser pulled out, all within a few months.

“The problem is that nobody dares to advertise in a paper that reports critically on the government and the prime minister,” Lekic explained. “Vucic and his people have targeted Danas as a hostile newspaper.”

Protesters have been holding Danas papers in the air, using it as a symbol of the lack of media freedom. They’ve urged Serbs to buy Danas and stop them from going out of business. Danas is being sold during the protests, and people are queuing to get a copy from street sellers.

“The campaign to save our paper is working,” says Milos Mitrovic, a journalist at Danas. “Sales are actually going up. People are taking selfies with Danas and sending them to us. It’s incredible.”

There have even been reports of companies donating to the paper, but urging them not to print any adverts as they would rather stay anonymous.

Every evening the protesters march through the city, passing the building of the state broadcaster RTS, blaming the station for not covering the protests on TV. “At first they were not showing it at all,” said one protester in Belgrade. “Now they are downplaying the numbers or saying that we are paid by foreign powers.”

But even recognising the protests is progress. “There is more coverage of the protests in international press than in Serbian media,” says Stevan Dojcinovic, editor-in-chief for the investigative journalism network KRIK, nominees for the 2017 Freedom of Expression Award for journalism. His collective has investigated many cases of corruption and misuse of power by the Vucic government. Dojcinovic points out that their investigations are also widely ignored by Serbia’s mainstream media. “RTS didn’t publish anything on the interview we did with the wife of Belgrade’s mayor, Sinisa Mali,” he said. In that interview, Mali revealed examples of corruption in which her ex-husband was directly involved.

Meanwhile, Vucic, who enjoys support from both the European Union and Russia, has calmly addressed the protesters during a press conference. “We are a democratic country and everybody has the right to be pleased or displeased with the election outcome,” he said. “Those who have time to protest can protest as long as they keep it peaceful.”

Lekic has only recently been appointed as president of NUNS but is clear on what the big issues facing independent media in Serbia are. “We don’t have institutionalised censorship in the classical sense but we do have frightened and underpaid journalists who think they have to be obedient to be able to keep their jobs,” he says. “This is how self-censorship kicks in and we have to change that.”

In fact, Lekic has already had his fair share of threats and intimidation. He was the subject of smear campaigns by TV Pink and Informer. He’s been labelled a foreign spy more times than he can remember. “I’ve been a journalist for 37 years but only in the last decade I’ve got used to being a target,” he says. His biggest worry is the effect it has on his family. “My daughter of twelve once called me from school, she was crying because a boy in her class had told her that her dad is a criminal,” he says. “He’d heard so on TV.”