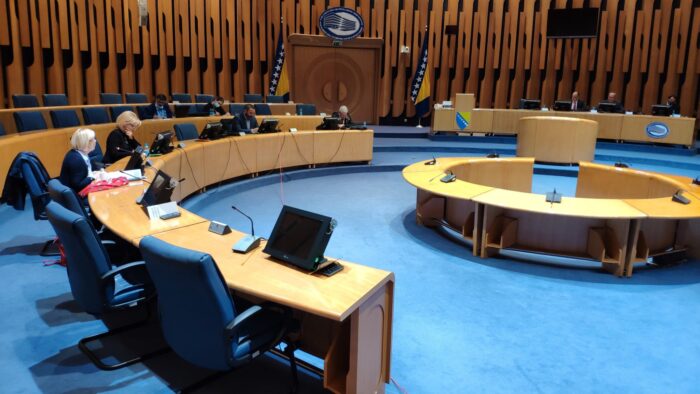 Representatives of journalists’ associations, at a hearing before the Ad-hoc Investigative Committee of the House of Representatives of the Parliamentary Assembly of Bosnia and Herzegovina determining the situation in judicial institutions, said that media workers in the country feel insecure and unprotected, that there are more and more unsanctioned attacks on journalists, as well as that general situation in the judiciary is very bad.

Siniša Vukelic, president of the Banja Luka Journalists’ Club, warned that “attacks on journalists are not punished effectively, and even if they come to court, the penalties are acquittal or inappropriately low.”

“I have a feeling that the judiciary treats journalists not as partners in the common goal of building a better society and making positive changes, but rather as enemies of this country and someone who needs to be persecuted”, Vukelić said.

He also pointed out that the ignorant attitude towards journalists has become another way of avoiding facts and covering up, noting that the question of “who must be punished – the journalist who did the investigation, the media that published it, or the one they write about” arises.

“You feel like you’re doing a worthless job that produces no results,” Vukelić admitted.

He considers it inappropriate to put pressure on journalists to reveal sources of information, reminding that this is a violation of numerous international documents. He also warned of data from a poll according to which “every fourth respondent in Republika Srpska thinks that it is sometimes justified to hit a journalist.”

“It is a consequence of the fact that attacks are not sanctioned and because the institutions treat us that way, without giving us the information we are looking for. The journalists revealed more than the investigative bodies did, and in return they accuse us of being responsible of such a situation, initiating investigations against us – unlike those who to do their job properly”, stated Vukelić.

He also pointed out to the members of the Ad-hoc Investigative Committee the fact that “in the 23 years of his journalistic career, the prosecutor never called him to ask what they wrote about, despite having material evidence, papers, etc.”.

He also admitted that, among people who identify as journalists in Bosnia and Herzegovina, “not  all of them are journalists, because there are those who take bribes and racketeer people”, and pointed out that “these are not journalists but criminals”.

“Those people harm the reputation of journalism, these are criminal acts that should be sanctioned by the investigative bodies, the prosecution and the courts,” Vukelic concluded.

The Secretary General of the Association “BH Journalists”, Borka Rudić, pointed out several problems faced by journalists in monitoring the work of the judiciary, emphasizing primarily that “they have a problem with access to information in judicial institutions.”

She also warned of the practice of “detaining journalists outside the provisions of the Criminal procedure code (CPC) and asking them to reveal sources of information which is neither in accordance with the CPC, nor with international documents”, but also noted that the reactions of judicial representatives to journalists’ writings were frequent.

“Some representatives of the judiciary use their powerful position in judicial institutions to attack journalists, and do not use mechanisms such as writing denials or addressing the Press Council,” said Rudić.

According to her, “individuals do not want to accept legitimate criticism, but use the position of power, even though they are the ones who can deny what the media has written through public dialogue and public appearances.”

“They do not use it, but rather file a lawsuit, therefore creating an unusual fashion of filing lawsuits against journalists by holders of judicial office” said Rudić.

Lawyer Marko Dragić also testified before the Ad-hoc Investigative Committee, pointing out, above all, “the incompetence and inability of the High Judicial and Prosecutorial Council (HJPC).” In his opinion, “the collapse of the judiciary began with the appointment of the current president and several members of the HJPC” whom he believes “were unable to at least maintain the existing legal order”.

“There are more and more demands for the resignation and removal of the president and members of the HJPC, but we should not expect resignations because their political mentors, whom they faithfully serve, will not allow that. That is why the article of the law that talks about their replacement needs to be changed”, Dragić suggested.

He also believes that, despite the position of the HJPC that he referred to in most of his presentation, “parliamentary research on the situation in the judiciary does not endanger the judiciary, but affirms its independence, respecting the fact that it is not unlimited. Therefore, the work of this Commission is the affirmation of the independence and autonomy of the judiciary, not its negation”, stated Dragić.

When asked by the members of the Committee whether the legal changes should decide if lawyers should be members of the HJPC, or whether it should be separated into a judicial and prosecutorial council, he replied “if it is able to reduce its activities and influence on the judiciary to the legal framework effectively, there is no need for separation”.

“When it comes to lawyers, it depends on how they are chosen, because there is a big difference between proposals and appointments. If this will cause the conflict of interests between lawyers and the obligations of the HJPC, then I am against it”, said Dragić.

The Ad-hoc Investigative Committee was established by the House of Representatives of the BiH Parliamentary Assembly with the aim of investigating the situation in the country’s judicial institutions, with special emphasis on the ability of the High Judicial and Prosecutorial Council (HJPC) to participate in the EU integration processes.

For the next session of the Committee, the services will contact several proposed holders of judicial office, including some members of the HJPC.