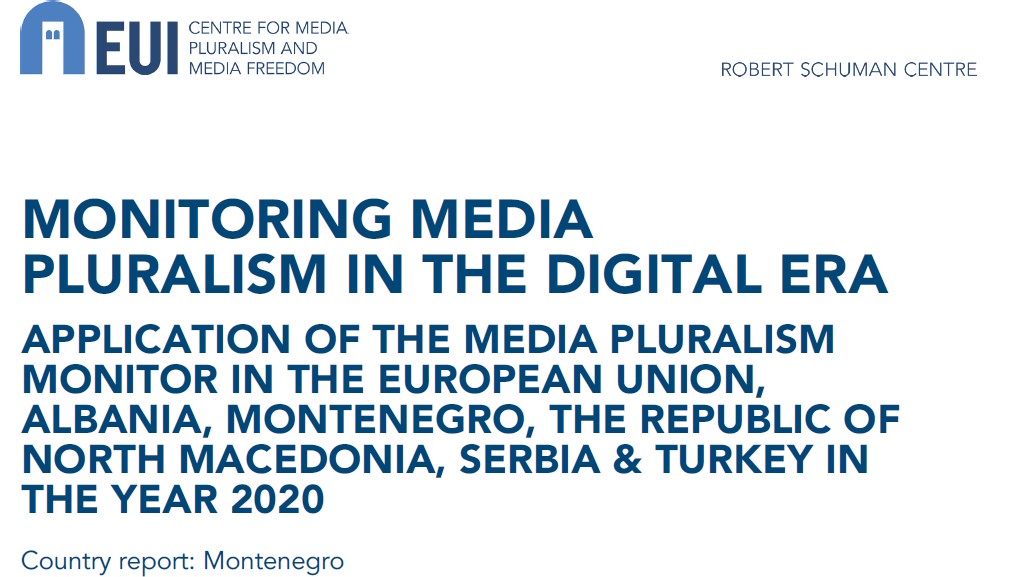 PODGORICA, August 2nd, 2021 – The existing legal framework in Montenegro is suitable for the development of media pluralism, but more in a quantitative than in a qualitative sense. The process of establishing the media, especially online, is extremely liberal. Existing regulatory and self-regulatory mechanisms, however, do not contribute to raising professional and ethical standards.

In that sense authors suggest developing media strategy through an inclusive debate, followed by amendments to media legislation, in which community media would also be recognized.

When it comes to posing risks to media pluralism, the report especially emphasizes the risk to social inclusiveness.

“First, Access to media for local and regional communities scores a very high 97% risk due to the absence of any special guarantees or legal support scheme for local and regional media as well as to the inexistence of community media. Second, Access to women also scores a high risk (75%) because women remain highly underrepresented in informative and political programmes, although they produce the majority of broadcasted information. Third, the indicator on Protection against illegal and harmful speech scores a high risk (81%) because the fight against disinformation in Montenegro is very limited”.

Also, the political independence area includes high-risk indicators for political control over media outlets, editorial autonomy and independence of PSM funding and governance. The mainstream media in Montenegro are mostly politically affiliated, and the national public broadcaster RTCG has been under the direct control of the state government.

“Market Plurality area records high-risk indicators in the field of news media concentration and the commercial and owners influence over editorial content. Institutional capacities in the field of competition protection are still underdeveloped. There are no safeguards to ensure that state resources allocated to local and national public service media (PSM) do not cause disproportionate effects on competition. Also, there are no mechanisms that would enable adequate protection of local media from the unfair competition of big regional media companies”.

As the authors state, there are no mechanisms granting social protection to journalists in the case of changes of ownership or editorial line.

“Moreover, there are no regulatory safeguards, including self-regulatory instruments, which seek to ensure that decisions regarding appointments and dismissals of editors-in-chief
are not influenced by commercial interests. Montenegro also does not have in place effective measures that would prevent journalists to participate in advertising activities”.

The report states that the legal establishment of the State-level Fund for Encouraging Media Pluralism and Diversity is a significant innovation that has yet to prove its worth.

In order to avoid abuse, they suggest establishing effective control over the ways of money from the fund and the effectiveness of its spending, encouraging the development and maintenance of community media, especially media intended for vulnerable and marginalized social groups, with money from the fund.

They also suggest expanding horizontal and cross-media concentration limitations to include digital media. It would also be recommendable to establish a single ownership register for all media and a single regulatory authority that would monitor compliance with cross-ownership rules.

“Efforts to create and implement rules for digital news media that limit political influence have generally been sporadic, insufficient, and ineffective. The authors suggest introducing a clear set of rules and limits for transparent monitoring of social media campaigns in the
Rules on electoral advertising”, it is stated in the report.

The Media Pluralism Monitor 2021 (MPM2021) is a scientific and holistic effort to document the health of media ecosystems, detailing threats to media pluralism and freedom in European Union member states and some candidate countries.